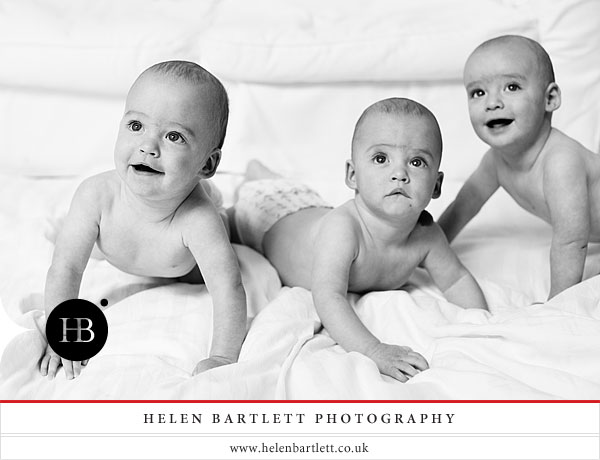 I’m from a big family and love a bit of chaos, so I was absolutely thrilled when Dominic called from the US to book in a session with his wife and triplet baby sons while they were on holiday in London this summer. I’ve photographed a number of twins over the years, but it was my first time photographing triplets and it was just as much fun as I imagined.

The boys were fantastic, and such relaxed babies – they were happy to go out to the park or roll around on the floor, laughing and giggling as they lifted their heads up and tried ever so hard to crawl. I think it will only be a matter of weeks before they are exploring under their own steam.

This picture, today’s ‘Just One’ preview, is from the second half of our session. We had started our morning on Putney Heath in South West London to take some lovely outdoor pictures in the morning light, and we had returned to the fabulous AirB&B that Dominic and Shannon had rented in Putney. After considering photographing the children on the bed in the main room, we decided that – with three babies rolling around – putting the duvet on the floor was by far the safest option. This meant that the children could roll around to their heart’s content, completely safe from any falls. The boys loved it, with so much space and freedom to play.

I love this shot with all the boys looking up and laughing at their parents, so happy and yet each with such distinctive personalities on display. I love how close they all are – with baby twins, their limbs are often entwined with a foot of one leaning on the back of the other, or an arm tucked under the head of their sibling. It’s just the same with triplets – the children are so connected to each other. They will have such a wonderful time growing up – they are almost a football team just on their own!

I hope you like this picture, today’s ‘Just One’ from our family photography session with triplet baby boys in Putney – do make sure that you check back soon for some more photographs from this wonderful family photo shoot.