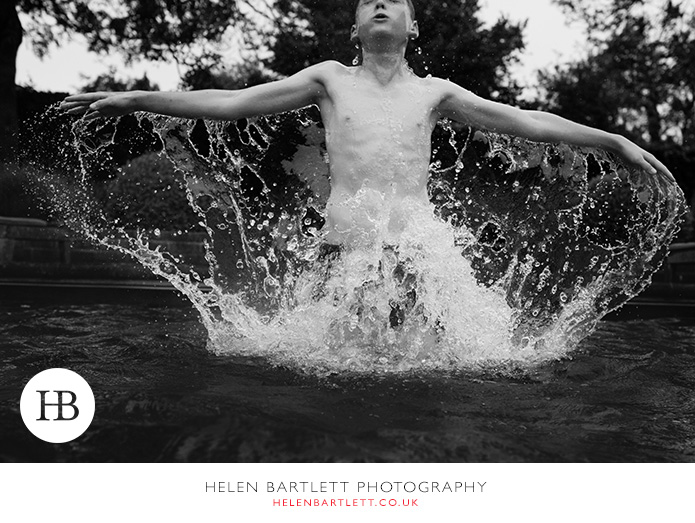 Another day, another water spray and it’s lovely to be sharing this image of Arthur in the swimming pool on the blog today. As regular readers know I love photographing children in the water, it’s such a wonderful environment for photography. Nobody can strike a pose or pull a face when playing in water, the fun and the energy just shines through creating stunning natural photographs.

This shot, which was taken as part of a shoot for my upcoming promo video, was so much fun to do. It was a cold and rather damp day, not quite what we had planned but the kids were keen to get in the pool knowing it would be lots of fun and, I later realised, the water was very warm, probably warmer for them than it was for us. The steam rising off the surface gave such a cool look to the images and the black lining to the pool made the water look incredibly striking, if I ever get a pool (which I admit is unlikely) I’m going for that, it looks amazing.

I wanted a picture of one of the children emerging from the water to capture all the droplets and the way that the water creates almost a second skin in those first seconds out of the water. I think I’d been over excited by al the amazing pictures of olympic swimmers and it’s always nice to have a challenge. I used a very high shutter speed to capture all the individual droplets as Arthur burst up through the surface arms spread high to create these wings of water.

It’s one of my favourite shots of the year and I hope you like it to, today’s just one from my recent promo video photo shoot.