Today’s ‘Just One’ preview image is from Rebecca’s recent family shoot in Ravenscourt Park in West London. I’ve been lucky enough to know Rebecca a number of years now and have photographed her fantastic boys a number of times at their West London home. It’s great fun photographing a large family – I love how everyone interacts and how each boy has such personality of their own.

This shot – an individual portrait of Rebecca’s youngest son, Oliver – really appealed to me as I took it. As the youngest of four myself, I know what it’s like to be the baby – you have to do the same things as your older brothers, even if they are slightly dangerous and, frankly, not really safe for you when you are a teeny tiny toddler.

Watching Oliver go across the bridge, refusing a helping hand (or even a safety hand) from his mother and his older brother made me think of so many things I have done as a child. I love the look of pleasure and achievement on his little face.

From a purely photographic point of view, I love shots like this as the composition is so strong. I love the leading lines of the bridge stretching from the front through to the back of the image, and the chains of the bridge anchoring the eye in and giving the image a really graphic feel with the horizontals and the verticals just cut by such a cheerful grin – that look of ‘look at me, I’m a big boy just like my brothers’. The stripy t-shirt and the verticals of the dungaree straps really add to the picture echoing the lines of the wooden slats and the chains at the side – it’s almost perfectly symmetrical except for his little hand, slightly raised as he moves forward toward the camera. This little element gives the image its feeling of movement – if he was totally still, it wouldn’t be nearly as strong a picture, but would feel more static and posed. It’s an image where everything comes together – the environment, outfit, expression and the lovely soft light giving us both beautiful catchlights in Oliver’s eyes and also picking up on the highlights of his beautiful blonde curls.

I love this image and look forward to sharing some more favourites featuring the rest of the boys from our children’s portrait photography session in Ravenscourt Park in Hammersmith and Fulham, West London soon. 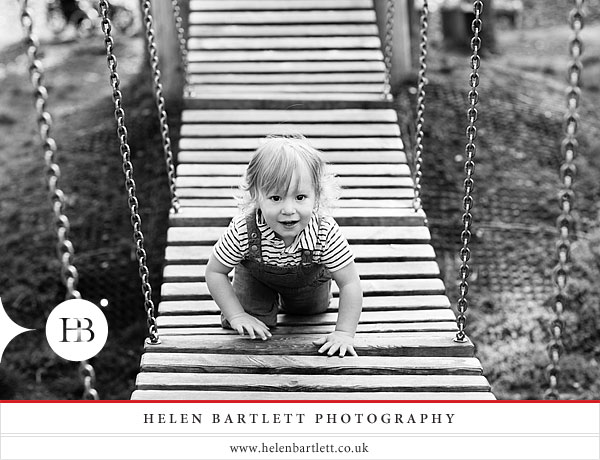