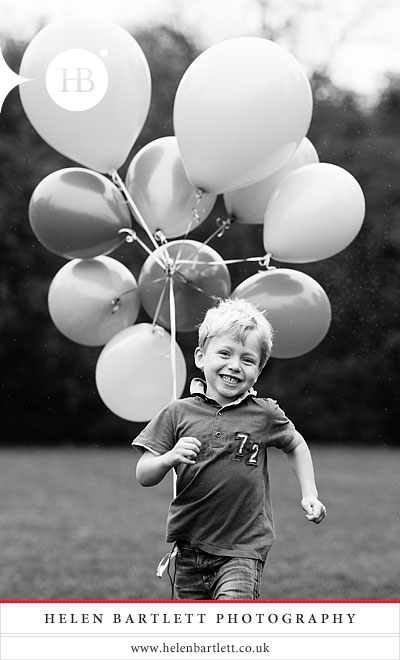 I can hardly believe this picture was taken at the end of October, with Max running around in a t-shirt for our family photography session in Holland Park, West London. It’s such a joyful picture and one that makes me smile so much, a real favourite from our recent children’s photography session.

Max and his younger brother are both really keen on balloons and so, towards the end of our fun morning session, their mother Janet picked up a selection from the party shop for the boys to play with. Tying them onto the boys’ waistbands was an inspired idea, leaving their hands free for running and avoiding the common pitfall of having the balloon strings in front of the children’s faces. Max was so pleased with his balloons, and ran backwards and forwards with the balloons streaming behind him – it works so well as a photograph, there’s such joy in such a lovely simple activity.

Another element that makes the pictures special to me is the rain – it’s so wonderfully British to be out at the park, with balloons, in a t-shirt, in the rain. It was only beginning to drizzle right at the end of our session (we were so lucky with the weather) but that texture in the background, with the raindrops evident on the dark background, add that little extra something that makes the picture stand out to me. I’m also thrilled with the precise positioning of the balloons, although this is something that I can claim no credit for – with strings fanning out from the central balloon like a star, and the light coloured balloons against the dark background of trees balancing the picture so well.

I’m thrilled with this, today’s ‘Just One’ preview image from our recent fun-filled children’s portrait session in Holland Park, West London and hope that you enjoy it too.