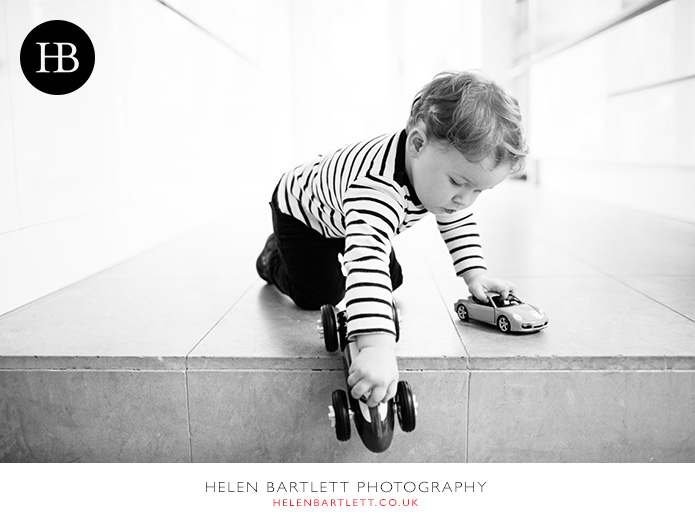 Some photo shoots have a theme – a motif that appears again and again always chosen by the child. This session was all about cars. We played cars in the kitchen, cars in the living room, we were even lucky enough to find an abandoned toy truck at the park and we played with that too. If it had wheels it was wonderful!

I love sessions like this as they capture a time in a child’s life so perfectly. Lucas may grow up to be an engineer or a formula one driver or cars may just be a childhood love that evolves into different hobbies as he grows up. Either way it’s lovely to record this early interest in pictures.

The photograph I have chosen for today’s Just One really captures this time while being a cracker of a photograph in it’s own right. I love images like this, something that is a quiet every day moment, a photograph taken while Lucas plays happily on the kitchen floor, but where composition and light make the image something wonderful. It’s one of the most rewarding parts of my job – to make a really special photograph of the everyday moments but these pictures are usually the ones that resonate most as time passes. I love pictures like this.

The shapes in this image are what make it work so well, the strong vertical line as Lucas pushes his car over the step (a new car that had arrived from the grandparents just that morning!), his arm running straight down the centre of the picture is such a strong compositional element with the nose of the car visible at the bottom (if that had been cropped out the image would not have worked so well). This gives the image such energy, even within this quiet moment of play. The lines leading us back work brilliantly too, the cupboard doors and the tiles on the floor all leading us to where Lucas sits within a tunnel of light.

Having a wonderful white kitchen with fabulous light from the door to the garden behind gives this image a clarity and simplicity that can be hard to achieve indoors and works so well to create this striking image.

The image works so well, I’m thrilled with it and I hope you will like it too, todays’ just one from my recent family and toddler photo shoot in Crouch End in North London.