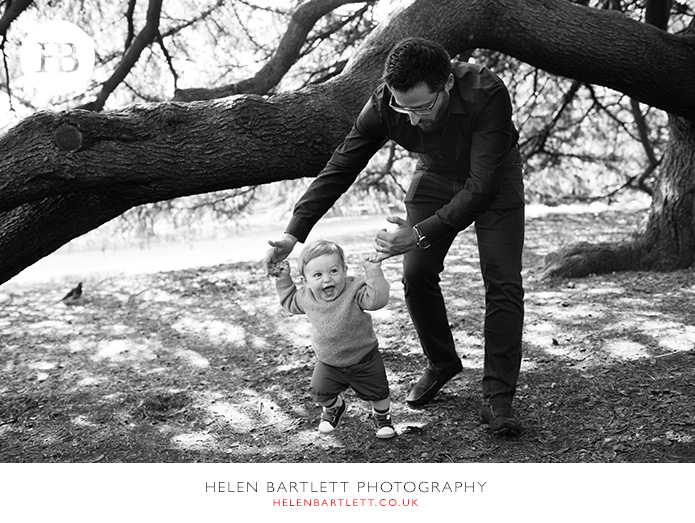 Some photo shoots feel as if they have an over-riding theme and that was definitely the case for this fantastic family photography session in Greenwich Park where the theme was ‘I want to RUN!’ Levison has recently discovered that he can get around super fast if his parents hold both his hands and run with him – and he loves it!

We spent the most wonderful morning together in Greenwich Park, one of my all time favourite places both for family photo shoots and also as a space in it’s own right – it’s where I learnt to ride a bike when I was a child. We had a great time, exploring the flower garden, playing among the trees and, of course, running around chasing anything that moved.

I feel that this picture really summed up the photo shoot for me and must really reflect this time in Levison’s life. I love his expression as he runs forward laughing up at his mummy. Looking closely you can see just how tightly he holds his dad’s fingers, part support and part ensuring that he keeps up, ‘run faster daddy, run faster’ I love how father and son are completely in step, each with their left foot turned out and right foot raised just the same amount, perfectly in tune.

Moments like this are incredibly special. It’s possible that, as I write this, Levison is already walking unaided, that transition can be so quick. But either way it won’t be long before he’s running around kicking a football and climbing trees. I’m sure he will still be pulling his parents along, wanting them to keep up on the great adventures that they will share together but it’ll be that one handed tug of the toddler rather than the supporting grip we see here.

Photographing family portraits in a documentary style means I am looking for these moments, these special pictures that capture this time in a child’s life. As I watch events unfold I’m always on the look out for pictures that will stand the test of time and become more special as the years go by. I think this picture will do that and I hope that Levison will love it when he’s in his teens and in his twenties and who knows, maybe he will look back on it as he holds the hands of his own child sometime in the future and will think back to his childhood and his wonderful parents and all the fun they have together.