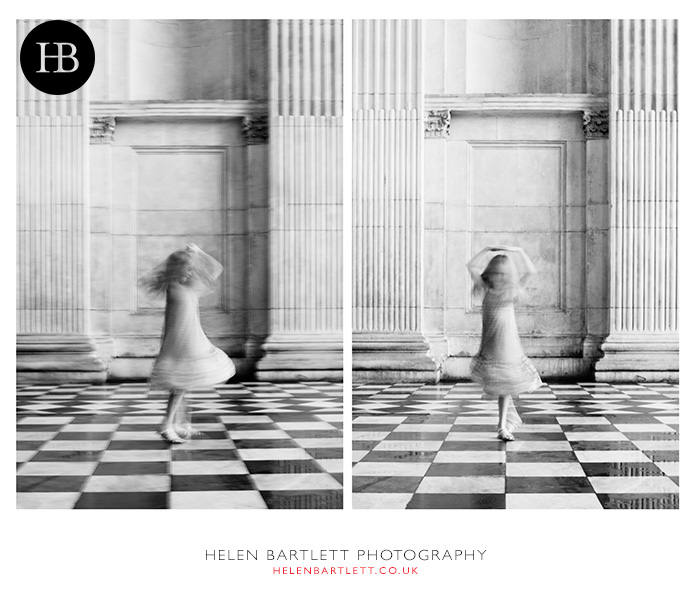 I’ve chosen a slightly different image for my ‘Just One’ today – or ‘Just Two’ as I should call it. I don’t usually present images in pairs but I felt that these two went together so well – in partnership they are more than the sum of their parts. I love the abstract feel but also how Emily’s profile, softly depicted mid-spin makes the image a perfect portrait.

I had met Charlotte and her lovely family bright and early on the bank holiday Monday, keen to utilize the very best of the early morning light and also to have London all to ourselves. Even the dog walkers were still in bed and there was only the odd solitary runner to keep us company. We had decided to meet on the South Bank to do a family photo shoot that had a bit of an urban London feel, to take in some of the stunning architecture and the landmarks of this end of London. It worked so well and the girls loved exploring some new areas while we took portrait photographs. They were both so much fun, we had a fantastic time.

This picture was taken on the steps of St Paul’s Cathedral, bright and early before the crowds arrived. It was lovely to have the steps to ourselves and the early morning light gave everything an ethereal glow. Emily had already shown an interest in dancing with some fabulous moves on the millennium bridge so I suggested the girls danced in the vestibule, the wonderful checkered floor and the stunning architecture of Sir Christopher Wren giving a sense of grandeur to the occasion.

It wasn’t just the dancing that reminded me of a scene from the ballet. It was the light, the mystery, the wonderful decorative surroundings and these beautiful girls spinning round, in their own world and oblivious to the camera. To really emphasize the feeling of mystery and magic I chose to use a long shutter speed, I wanted to capture the movement and give an abstract feel to the picture. It worked so well and I love how these two images compliment, one with the perfect positioning of the hands, above the head in balletic style, the other mid spin, Emily’s profile caught perfectly in the split second the image was made. I love how this gives us magic and mystery but also individuality, it’s a portrait of an individual as well as a beautiful rendition of childhood itself. Together they work so well.

I hope you like them as much as I do, this abstract and mysterious portrait photograph from our recent family photography session with an urban theme on the South Bank in Central London.