I’m thrilled with this picture from a recent family photography session in central London and Dulwich Park with Sharmistha and her wonderful family. When I’m choosing a picture for a ‘Just One’ preview image from a recent shoot, I often like to post something a bit different from the norm – a picture that I’m really pleased with, where I have tried something new or really worked a scene to capture something special, and this picture certainly fits that bill.

As regular readers know, I do love a silhouette and the steps of St Paul’s Cathedral were just perfect for something dramatic and out of the ordinary. London is really magical first thing in the morning at the weekend; we met at 8am to make the best of the light and because Sharmistha was keen to have some pictures taken on the Millennium Bridge before it became too busy (I’m thrilled with our bridge shots and look forward to sharing some of these pictures in a full blog post soon). We took some family pictures on the Millennium bridge and then decided to head over to St Paul’s, somewhere I’ve never taken pictures before even though I’ve lived in London for many years.

We had such a great time chatting away; Sharmistha’s son Arnav was heading to Cambridge that day to start his degree and so I (and I hope, helpfully!) bombarded him with all my best tips about Cambridge, having lived there for a few of years – Inders Kitchen do the best curry, the Pint Shop does a spectacular scotch egg – while the only hill worth running up is out of town to the south, and you really need a very big bike lock. Ah, I miss my old stomping ground. It’s so exciting talking to someone about to head off to University – it’s such an exciting time, and Arnav was so calm and confident I know he will have taken to University life like a duck to water.

St Paul’s cathedral is such an incredible building and we were lucky to have the magnificent steps to ourselves. We captured various family group shots, and then I asked the children (or young adults, to be fair) if they would mind squeezing in between the pillars as I had something different in mind. This was the shot I was after – a silhouette with the children and the pillars as the subject, and then the sky – dramatic and interesting – as the background. I love it, and it’s a little out of the ordinary in a family photography session.

After spending some time taking pictures in Central London, we headed back to the family’s home in Dulwich to pick up the family’s adorable beagle and visit Dulwich Park. 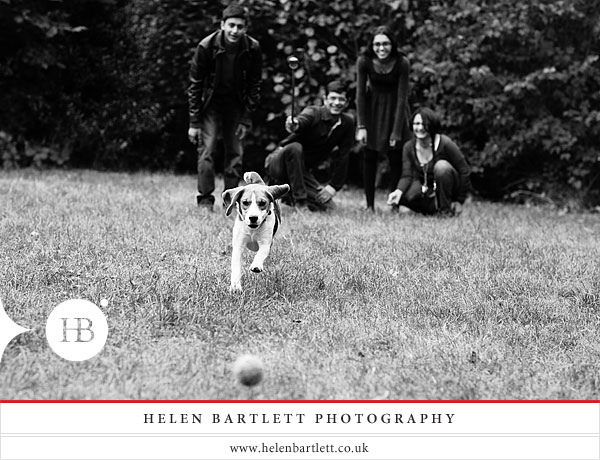 I’m absolutely thrilled with the pictures from this shoot and I look forward to sharing some more with you soon. In the meantime, I do hope you enjoy this picture – today’s ‘Just One’ from our family photography session in London.